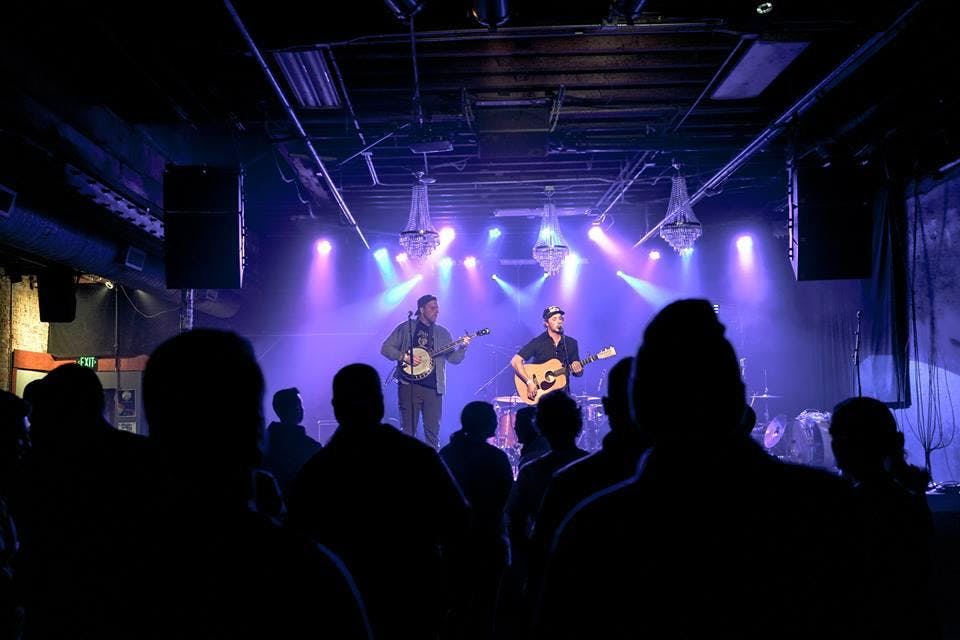 All sales are final. Review your order carefully, there are no refunds for any reason. Tickets are non-transferable. No tickets are mailed to you, your name will be on the will call list night of show. Night of show (1) bring a valid government issued ID and (2) print your confirmation e-mail and bring with you night of show.

With roots embedded in the Colorado Rocky Mountains, and a sound unhinged in the capital of Texas, Shovelin Stone is a music almost as unique at the friendship it stems from. A shared passion for old-timey bluegrass is what brought Makenzie and Zak together, but it's the unknowing joy for the moment and the complications that life brings that continues to push the duo forward. The road is winding but one thing is for sure that with these two at the wheel it's going to be a wild ride.

Larry Patrick Nix, born in Tupelo, raised in Alabama, is the son of the Earth and Moon, torn between a life of fighting ultra-crime, and the life of a Music Man. He chose the ladder. No that's right, the ladder, and he climbed and climbed and climbed. ...until the ladder collapsed, and dammit if he didn't design his own ladder. Made of wood. Strong maple, that doesn't bow in the humidity. Shit, sorry. The songs, right. They're good too.. Classic shit.

RANDALL CONRAD OLINGER (RCO) CREATES A CUNNING BRAND OF AMERICANA THAT WHIPS THROUGH THE SALOON DOORS ON A WARM BREATH OF WIND, SETTLES ONTO THE BARSTOOL NEXT TO YOU AND KEEPS YOU COMPANY THROUGH THE NEXT MORNING

RCO IS A ORINGINAL ACT, AND THE MUSIC GENERATED BY THIS ONE-MAN MELODIC POWERHOUSE CONJURES IMAGES OF A SIX-STRING BALLADEER ROLLING AMID A NEW ORLEANS CAVALCADE ON A RICKETY OXCART DRAWN BY AN ONERY ONE-EYED MULE.

RCO SINGS OF WATERWAYS, REVENGE, WANDERLUST, AND REDEMPTION WITH A HYBRID HOWL THAT IS EQUAL PARTS ROAD-TESTED ROCK AND ROLLER AND SOULFULLY EMBATTLED SOUTHERN BLUESMAN. THIS FORMER SAILOR'S MUSICAL CREATIONS ARE NOT MERELY SONGS. RATHER, THEY ARE MOVEMENTS THAT DRAW YOU IN, SWEEP YOU UP AND CARRY YOU ALONG WITH THE CURRENT -- SOMETIMES DELIVERING YOU PORTSIDE SOLACE AND OTHER TIMES PULLING YOU OUT UNTO THE BEDLAM OF THE OPEN SEA.